Scenarios where Knicks can trade for Anthony Davis, including one where they add 2 max free agents 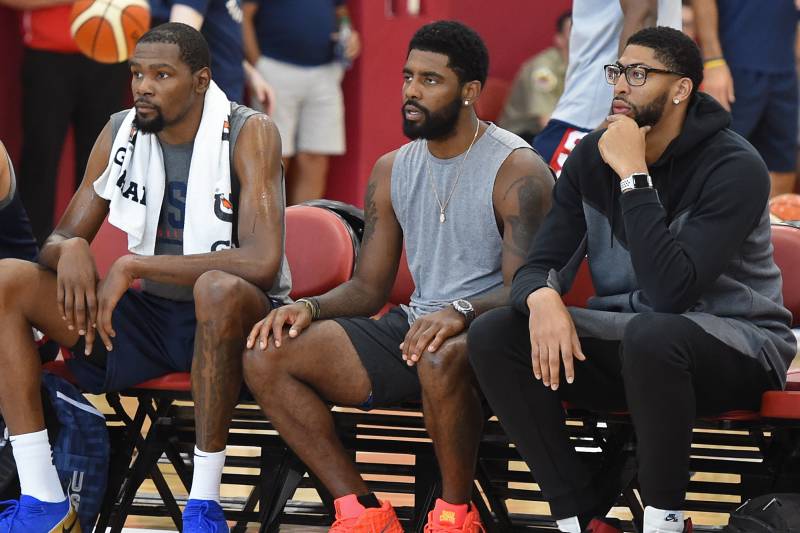 THIS POST WAS ORIGINALLY PUBLISHED BY IAN BEGLEY AT THEKNICKSBLOG. THIS IS JUST A REPRODUCTION OF THAT POST (UPDATED TO INCLUDE A COUPLE NEW IDEAS).

IAN AND I WORKED VERY HARD ON THIS POST. PLEASE DO NOT COPY THIS WORK WITHOUT PROVIDING PROPER CREDIT.

The Pelicans still hope to convince Anthony Davis to stay in New Orleans. “We feel confident that we can create the right, and are creating the right, environment for Anthony,” Pelicans top executive David Griffin said Tuesday.

Those hopes aside, it’s fair to assume at this point that Davis remains committed to leaving the franchise.

At the trade deadline last February, Davis let it be known that there were four teams he’d prefer to be traded to were the Lakers, Clippers, Bucks and Knicks.

The Knicks, of course, would surely have a strong interest in trading for the big man this summer if he wants out of the Big Easy. And we know that Davis would consider re-signing with the Knicks if he felt he could succeed with the club. So what could a potential trade look like?

When you talk about potential Davis trades, there a couple things to consider.

Another is Davis’ trade bonus, which would pay out up to an additional $4.1 million on top of his $27.1 million salary for next season if he’s traded this summer. That bonus would be payable by the Pelicans, but would be added to the cap sheet of any team that acquires him. Players are allowed to waive all or part of their trade bonuses, at their discretion.

The Knicks can create as much as $72.5 million of cap room this summer, if they were to waive Lance Thomas (his $7.6 million salary becomes $1.0 million guaranteed on June 30); renounce their rights to Emmanuel Mudiay and other free agents; and decline their team options on Allonzo Trier ($3.6 million), John Jenkins ($2.0 million), Henry Ellenson ($1.6 million) and Billy Garrett ($1.4 million); but retain Damyean Dotson (whose $1.6 million salary becomes guaranteed on July 15).

With that in mind, here are a couple pathways for the Knicks to acquire Davis in trade:

Let’s assume the Knicks sign Kevin Durant to a max contract ($38.2 million in 2019-20, with a $164 million total over four years). The remaining $35.2 million in cap room would be more than enough to acquire Davis’ salary (between $27.1 million and $31.2 million, depending upon whether he demands his trade bonus). So they could potentially acquire Davis for a package of young players and picks, without needing to match his salary. They would even have cap room to spare, in addition to the $4.8 million room mid-level exception, with which to fill out the roster.

Davis’ trade bonus could impact which players the Knicks would need to send out in a deal, as well as what actions they take prior to the start of free agency. Counterintuitive as it may seem, New York could potentially gain flexibility in trade scenarios by exercising the team options of Trier, Jenkins, Ellenson, and/or Garrett. While they can create up to $72.5 million of cap room, they only need $70.0 million to sign both Durant and Irving. This could prove important if Davis demands his full trade bonus, because the Knicks wouldn’t have enough salary left over after signing Durant and Irving to trade-match for him unless they exercise at least one of the options.

Exercising all of the latter three options would still leave New York with $70.1 million of room – enough to sign both players, while giving them another $5.1 million of tradable salary. But the Knicks would surely prefer to exercise Trier’s option instead. He’s by the far the best of the group, and could be quite valuable either as a potential asset in trade for Davis or as a complementary piece to a potential Irving – Durant – Davis core in New York. Which makes him an intriguing factor in the Knicks’ summer plans.

The Knicks only have until June 20 (the day of the draft) to decide what to do with Trier’s $3.6 million team option. If they exercise it, he’d count against their cap at that number. If they decline it, he’d have a cap hold of $4.2 million if they extend a qualifying offer to make him a restricted free agent or $4.1 million if they keep him unrestricted.

They could exercise the option and still have enough cap room for both Durant and Irving, but they’d need to waive Dotson to get it. That wouldn’t be optimal (particularly if Davis were to demand his full trade bonuses, at which point the Knicks wouldn’t have enough salary to salary-match for him without including Trier – which would defeat the purpose). A more subtle goal for the Knicks heading into the summer could therefore be to find a way to retain both Trier and Dotson; if one needs to be included in a potential Davis package, the Knicks could still retain the other. After all, even in a potential Irving – Durant – Davis scenario, shooting guard would remain a position of need.

Exercising Trier’s option while retaining Dotson would leave them a mere $130K short of necessary cap room for both Durant and Irving. To bridge that gap, either Durant or Irving could take the slightest of discounts from the max or the final salary cap would need to increase from its current $109 million projection to $109.5 million.

But there’s another, more creative possibility to squeeze out that extra $130K in cap room. The Knicks presumably built up quite a bit of goodwill with Trier by giving him a his two-year, $6.9M contract last season (despite being undrafted, he made a total of $3.6 million last season alone; that’s about to what the No. 10 pick in the draft made). If they need a bit of cap room, they could try to turn that goodwill into an (unwritten) agreement whereby the Knicks decline his $3.6 million option and the two sides follow it up in free agency by signing a new contract that starts at a slightly lower figure: a $250K – $375K reduction should be more than enough.

So let’s assume the Knicks find a way to get that done – and head into trade discussions with the Pelicans with cap room for Irving and Durant secured; with RJ Barrett targeted for the No. 3 overall pick the draft; and with Ntilikina, Smith, Knox, Trier, Dotson and Robinson under contract.

If Davis waives his trade bonus, the Knicks could reach the $21.6 million in outgoing salary required to salary-match for Davis by putting together various packages of players, including a potential package of No. 3 overall (RJ Barrett), Frank Ntilikina, Dennis Smith Jr., Kevin Knox and Damyean Dotson. If Davis doesn’t waive his trade bonus, they could reach the $24.8 million in outgoing salary required to make the trade work by swapping out Dotson for Allonzo Trier. In either package, they can (and would probably need to) include multiple future first-round picks. They have six over the next four drafts – all four of their own, plus two more from the Mavs – but can’t trade all of their first-round picks in successive years.

As for timing, the Knicks would first need to sign Durant and Irving, then complete the trade for Davis. They’d also need to sign Barrett to his rookie-scale contract, and then wait 30 days for him to become eligible to be traded.

Upon completion, they’d still have the room mid-level exception ($4.8 million) and veteran’s minimum exceptions to fill out the rest of the roster.

Which means that the one hesitation that Knicks fans may have in trading for Davis – that it would deplete the roster – doesn’t necessarily need to be true.

It remains unclear as to what the Pelicans would demand in trade for Davis, but New York could conceivably put forth a compelling trade package – one that could include, say (a) the #3 pick overall pick in the 2019 draft, (b) two future first-round draft picks (with whatever protections are negotiated), (c) various second-round picks, plus (d) Ntilikina, Smith, Knox and Dotson (or Trier) – and still create a roster that includes Kyrie Irving, Allonzo Trier (or Damyean Dotson), Kevin Durant, Anthony Davis, Mitchell Robinson, and a room mid-level exception player, all while retaining a full slate of future first-round draft picks.

After six consecutive seasons of futility, the Knicks will enter the summer with hope for a better future. Flush with cap room, the No. 3 pick in the draft, two future first-round picks from the Mavs, and several quality young players, New York could be positioned to transform its roster from a perennial lottery team to a perennial title contender.