Could A Potential Anthony Davis Acquiror Offer Him A Compelling Extension? 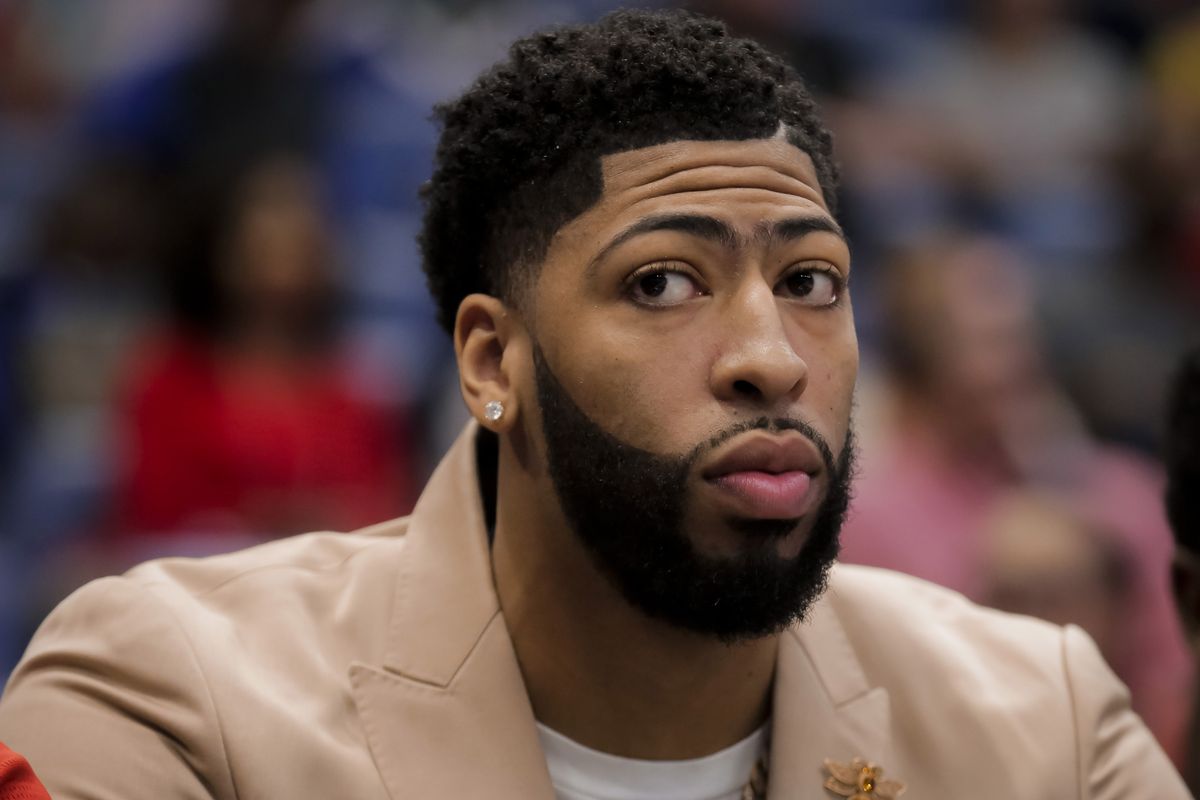 After winning the NBA Draft Lottery and the rights to select Duke’s Zion Williamson with the No. 1 pick in the 2019 NBA Draft, the New Orleans Pelicans were hoping to convince All-Star forward Anthony Davis to stay.

Those hopes aside, it seems all but certain that Davis will ultimately leave the Big Easy. The Pelicans have begun negotiating with teams about potential trade scenarios.

Among the teams that could potentially create compelling trade packages are the Los Angeles Lakers, Boston Celtics, New York Knicks, Brooklyn Nets, Los Angeles Clippers, Toronto Raptors, and Denver Nuggets. Back at the trade deadline in February, Davis’ representatives informed the Pelicans that he would be willing to sign long-term with the Knicks, Lakers, Clippers and Milwaukee Bucks. More recently, it’s been suggested that he’s reduced his list of preferred teams to just the Knicks and Lakers. Most aggressive at this point are reportedly the Lakers and Celtics.

The issue that every one of those teams, and any others, will have to contend with in suggesting trade proposals is just how much they’d be willing to give away in exchange for a superstar who is entering the final season of his contract, and could be lost in unrestricted free agency the following year.

Davis is set to earn $27.1 million next season, and he has a player option worth $28.7 million for 2020-21. If he declines the option, he could replace the latter figure with a $34.8 million salary as a free agent in July 2020. Barring injury, that seems all but certain. Which raises the very real prospect that he could be just a one-year rental.

Big trade packages therefore carry big risk. It’s a risk that could pay off on the grandest of scales (see the Raptors, with Kawhi Leonard), but also has the potential to cripple a franchise. This is high stakes stuff!

Potential acquirors would surely love to mitigate that risk by attempting to immediately lock Davis up for multiple years. They’ll surely request to speak with him about the prospect of signing on for the long term before finalizing any trade. Getting his commitment could cause them to be more aggressive in their trade packages. To do that, they’d need to get him to sign an extension. But could any team actually build out an extension for him that would meet or exceed what he could get in free agency next summer?

When you talk about potential Davis extensions, there are several things to consider.

One is his trade bonus, which would pay out up to an additional $4.1 million on top of his $27.1 million salary for next season if he’s traded this summer. That bonus would be payable by the Pelicans, but would be added to the cap sheet of any team that acquires him. Players are allowed to waive all or part of their trade bonuses, at their discretion. If they do waive any part of it, their contracts cannot be renegotiated or extended for 6 months.

Finally, Davis will be a 7-year veteran when the salary cap year turns over. Players with that level of experience are generally only eligible for 30% max salaries (notwithstanding potential super-max eligibility). That would make him eligible to sign a new contract as a free agent next summer starting at $34.8 million, which equates to as much as $205 million over 5 years with the acquiring team or $152 million over 4 years with any other team. The highest tier, 35%, is available to players with 10+ years of experience. He’ll get there in the summer of 2022, prior to the 2022-23 season, at which point his max salary would project to start at roughly $45 million. So whatever path he takes, he may seek to hit free agency again ahead of the 2022-23 season. That’s the assumption we’ll use in this post, which means the comparisons will all be based on the next 3 seasons.

The above considerations may seem unnecessarily technical, but they have huge implications for Davis’ potential future payouts, which tend to stump even the most highly-trained salary cap experts.

WHAT ANTHONY DAVIS COULD MAKE IN FREE AGENCY

WHAT ANTHONY DAVIS COULD MAKE IN AN EXTENSION

If Davis is traded, given all of the restrictions presented above, there is no scenario in which he could make as much over the next 3 seasons as the $103.5 million he could get by waiting until free agency, unless two things happen: (i) he renegotiates his existing salary and (ii) his team waits 6 months to lock in an extension. In fact, in any other scenario, he’d be giving up at least $5 million!

This is a much more powerful statement than you may realize, given the multitude of options Davis has available (accept his trade bonus, or not… extend, or not… renegotiate, or not… wait 6 months, or not… exercise his player option, or not… etc.). And it has serious implications.

So, for example, the Celtics aren’t likely to have cap room, even if they lose Irving to free agency. They could be trading for a one-year rental, and hoping he re-signs in free agency. Big risk there, particularly with the prospect of Irving leaving.

The Raptors aren’t likely to have cap room either, even if they lose Kawhi Leonard, a prospect which is growing increasingly unlikely.

The Lakers would be in a similar predicament if they tried to pair Davis with LeBron James and another max free agent this summer. So, too, would the Knicks if they tried to to sign two max players with cap room, and then exceed the cap in trading for Davis.

For teams that would have cap room after trading for Anthony Davis, they could potentially increase his $27.1 million salary all the way up to the $32.7 million max (30% of the $109 million salary cap, for a player with 7-9 years of NBA experience). But even if they were willing to do so, the problem is that they’d still need to wait 6 months for the extension in order to build a higher 3-year payout than he could get in free agency – which means they wouldn’t get any up front assurances from Davis (though 6 months is certainly better than a year), and carrying cap room that long for a potential renegotiation and extension is more challenging than you may realize.

It won’t be easy – borderline impossible – for a team that trades for Davis to carry between $1.5 million and $5.6 million of excess cap room (depending upon whether he exercises his $4.1 million trade bonus) into the season, in order to simultaneously renegotiate and extend his contract in January. Even if it were to have the cap room available at the time of the trade, building out the roster would surely suck it all out.

That seemingly kills the extension idea for most projected Davis suitors.

What if a team wanted to offer Davis an extension that pays out more than he could get in free agency, but doesn’t want to carry cap room into January? Is there a way to get that done?

Yes, by employing a more creative strategy – one that has never happened before in NBA history: renegotiate now, extend in 6 months!

How would that work?

That’s more than the $103.5 million he could get in free agency.

But how is it legal, if renegotiations typically prevent subsequent extensions for 3 full years (as stated above)? The renegotiation would only increase his salary by $1.5 million under this set of circumstances. That’s far less than the 10% threshold that would trigger the rule.

It’s never happened before. But it’s possible. And could be a distinguishing feature for a team with the necessary cap room to pull it off — like, say, the Knicks (if they were to pair him with just one max contract free agent), Lakers (if they bypass their own 3-superstar approach), Nets (though they themselves could be two-star hunting, and using valuable cap room this way would be painful), Clippers (who figure to be major players in free agency) or Nuggets, each of which could create the cap room to make it happen.

For some, given the assets they’d need to surrender from an already talented roster, it could be the only way they’d be willing to proceed forward.

If I’m part of the salary cap crew in Denver, or either New York or L.A. team, I might certainly consider adding it as part of my sales pitch – the chance for Davis to snag more money than he could get in free agency, locking in a full $32.7 million max salary for the upcoming season up front and the rest of it 6 months early. It’s unlikely to be a tipping point (or even be something of interest), but when the stakes involve landing a star-caliber player at the level of Davis (and potentially using him to recruit other stars), everything matters.

An extension makes a ton of sense for any team that trades for Davis – it’s a protection measure, against giving away the ton of assets that would be required to get him, and then losing him for nothing in free agency the following summer.

But it doesn’t necessarily make a whole lot of sense for Davis – who in most cases would lose money, and would certainly lose flexibility. He’s unlikely to give that up, unless it’s in what he deems to be the perfect situation.

Is your favorite team’s perfect summer a perfect situation for Davis? If so, does it have the cap room necessary to execute the perfect summer and still have enough left over to raise his 2019-20 salary to the max? And would it have the patience to wait 6 months to lock in his extension (during which time he could potentially change his mind)?

Attached is a review of the most common payout scenarios for Davis: 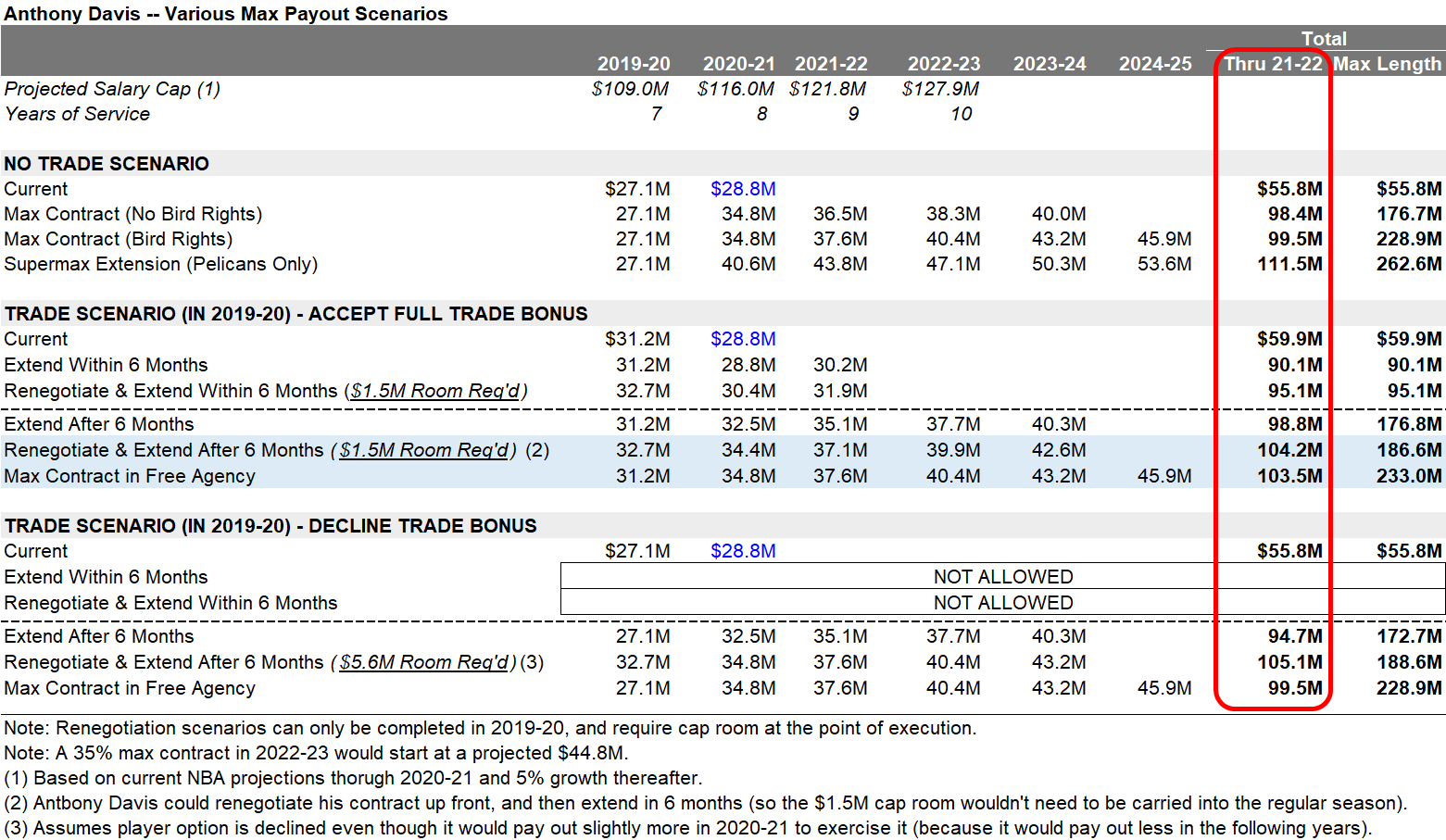