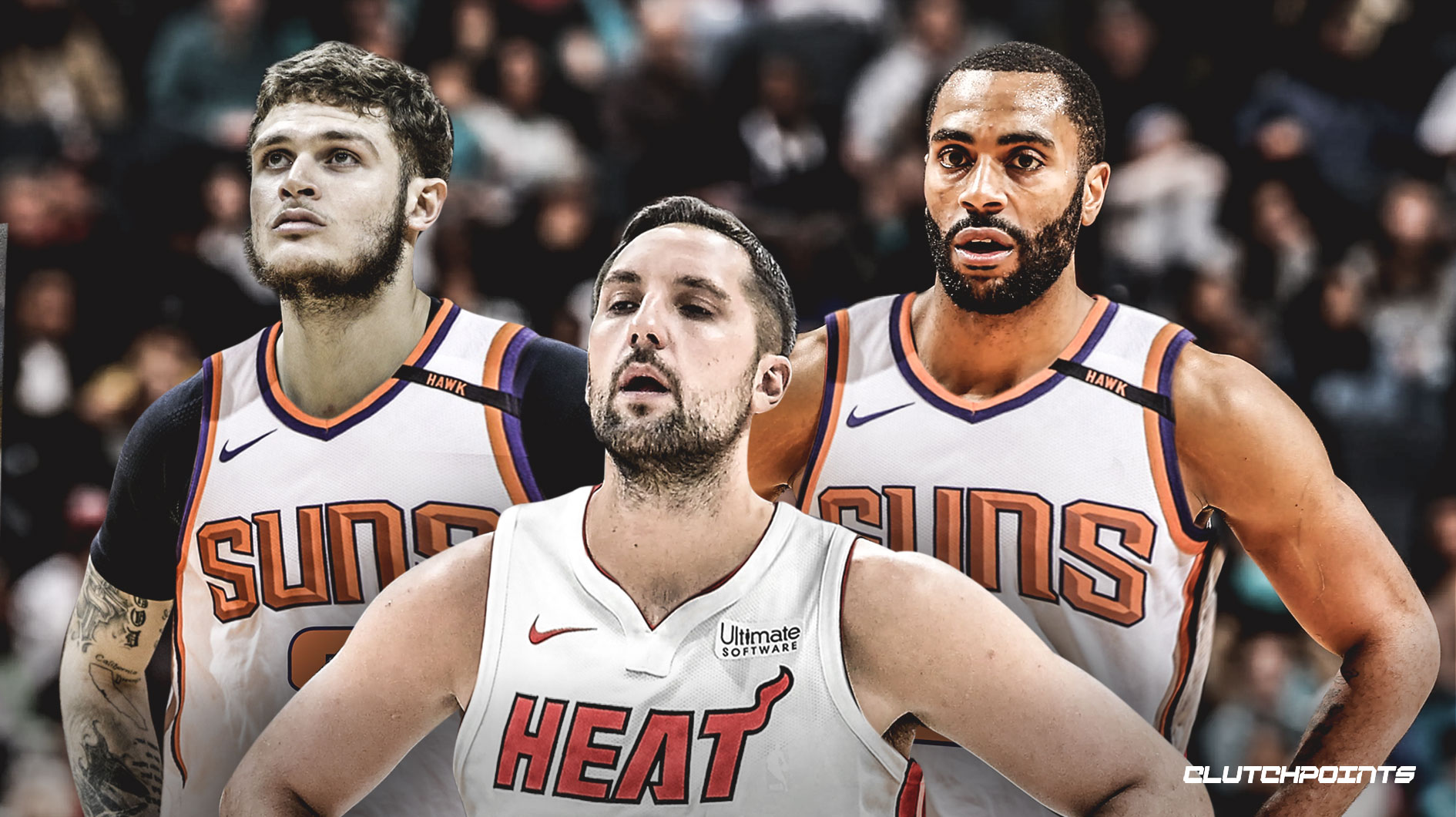 The Heat did indeed sign consecutive, strategically-timed 10-day contracts. And they will indeed now officially miss the playoffs. But this is a classy organization. They did not limit Olynyk’s playing time. Olynyk has therefore exceeded 1,700 minutes, and will collect a $1.0 million bonus as a result, which will put the Heat $1.0 million over the luxury tax threshold. That seemingly sealed their fate as a luxury taxpayer, as was universally written across the Internet… except in one place – by me!

I refused to accept such an awful fate for the Heat — both missing the playoffs, and nonetheless paying the tax — and therefore made a wild prediction: The Heat should waive Rodney McGruder by the April 7th at 5:00 pm EDT deadline. Why? Because if he were to be claimed off waivers, the Heat would clear his $1.5 million salary from their team salary and, as a result, slip below the luxury tax line. Clever, right?

I first came up with the idea as Olynyk’s minutes bonus were becoming inevitable (believing that the Heat wouldn’t artificially decrease his minute totals in the midst of a playoff run), but couldn’t immediately publish it do to the rampant idea theft of a certain unapologetic so-called journalists. I did, however, publish the idea on April 6th. I then reiterated it the following day, making clear that the action needed to be taken immediately (i.e., within the subsequent two hours).

Well… As it turns out, they did precisely that. McGruder was indeed waived at the last possible moment, and was subsequently claimed off waivers by the Los Angeles Clippers.

They took a roundabout way of getting there but, as I predicted, the Heat will avoid the 2018-19 luxury tax. By doing so, they will: (i) wipe away their entire luxury tax bill (which was projected at $9.7 million at the start of the regular season), (ii) collect a $3.1 million distribution from the proceeds of luxury taxpaying teams, and (iii) push out repeater tax concerns another season (to 2022-23 at the earliest).

The Miami Heat approached the NBA’s Feb. 7 trade deadline with three primary goals in mind: to placate the unhappy consummate professional Wayne Ellington, to reduce their payroll, and to clear positional logjams.

They partially addressed all three in one shot, by trading Ellington and Tyler Johnson to the Phoenix Suns in exchange for Ryan Anderson.

Ellington, who signed a one-year, $6.3 million contract with the Heat this summer, was waived by the Suns shortly after the trade, enabling him to sign a free agent contract with the team of his choosing (and grab some extra cash in the process).

Johnson received a four-year, $50.0 million offer sheet from the Brooklyn Nets as a restricted free agent in the summer of 2016. Despite intricate salary cap rules that were deemed so unfair to the Heat that they were subsequently changed in the latest collective bargaining agreement, whereby the majority of the salary and cap hits in the contract were backloaded to the final two seasons, the Heat, just after losing Dwyane Wade to the Chicago Bulls, questionably elected to match the offer sheet and keep him, despite the onerous salary cap and luxury tax implications that have hamstrung the team ever since. As a result, Johnson is earning $19.2 million this season, and has a player option for the same amount for next season.

The Heat also sent the Suns $1.8 million of cash in the trade, to cover the difference in the players’ remaining 2018-19 salary payouts. Miami now has $3.4 million in tradable cash remaining for the rest of the season. They also created a $6.3 million trade exception in the deal.

Until Goran Dragic and Derrick Jones Jr. return from injuries at some point after the All-Star break, the Heat’s rotation now figures to include Justise Winslow, Dion Waiters, Josh Richardson, Kelly Olynyk and Hassan Whiteside as starters, and Dwyane Wade, Rodney McGruder, James Johnson and Bam Adebayo off the bench. That’s still nine deep with rotation-capable players, and ultimately a still-too-many imbalanced 11 when the team is completely healthy.

Overall, the Heat roster now stands at 13 (excluding two-way contracts). By league rule, they have two weeks to add a player to build back up to the league minimum of 14.

The trade was undoubtedly a luxury-tax driven move for the Heat: (i) for 2018-19, it drops the Heat’s team salary from $6.3 million over the tax line to $1.2 million over the tax line, resulting in a projected $8 million of luxury tax savings, and (ii) for 2019-20, it converts Johnson’s $19.2 million player option (which he’ll surely exercise) into a $15.6 million partial guarantee (which the Heat will surely capitalize upon by waiving him this summer, if they can’t trade him), which, with the Heat currently over the projected luxury tax line, figures to result in another $5 million or so of luxury tax savings.

The trade was a brilliant piece of technical work by the Heat — which (i) squeezed every last bit from the salary-match to drop their team salary a full $5.1 million, and (ii) required the consent of both Ellington (who had an effective no-trade clause) and Johnson (who had to forgo all but $112K of his $1.0 million trade bonus) to make happen.

But (because they had to take back salary in the trade, rather than finding a trade partner that could swallow Ellington’s full $6.3 million salary outright) the trade, by itself, was not enough to drop the Heat below the luxury tax line for this season, and the Heat weren’t willing to compromise their competitiveness to make that happen. Had they followed up the trade with another of Rodney McGruder (whose $1.5 million salary had just $541K remaining to be paid on it) to any one of the 10 or so teams that were capable of taking him in (without crossing the tax line themselves), the Heat would’ve dropped under the tax line, permanently. They didn’t.

Nonetheless, there is still a path for the Heat to avoid the luxury tax, and it’s as clear as it would be painful.

For the Heat to avoid the 2018-19 luxury tax, three things would need to happen: (i) Kelly Olynyk can’t play 1,700 minutes, (ii) the Heat must miss the playoffs, and (iii) the Heat’s next contract must be a 10-day contract (following by yet another one after it expires).

As a result of the trade, the Heat are currently $1.2 million above the tax line. The trade also leaves the Heat with 13 players under contract, and needing to build back up to 14 within two weeks; by using strategically-timed 10-day contracts, they can limit the cost of that 14th player to as little as $171K. That would put them $1.3 million over.

Kelly Olynyk has $1.4 million in bonuses (which are currently being included in the Heat’s team salary because he earned them last year) – $1.0 million for playing 1,700 minutes, and $400K for making the playoffs.

So… the Heat could be as little as $1.3 million over the tax line at the end of the season, even after accounting for their required 14th player but before making any bonus-related adjustments. And the Heat would save $1.4 million if Olynyk misses out on both of his bonuses. Which would drop them under the tax line, permanently…

They’d even have as much as $53K to spare, which they’d undoubtedly use to build back up to 15 players at the very end of the regular season — enabling them to still prioritize growth for the future, by potentially signing up to two players to rest-of-season or multi-year deals, and thereby potentially retain their rights into training camp and beyond. Two-way players Duncan Robinson and/or Yante Maten could get extended looks for those spots toward the end of the regular season (they can be called up for the rest of the regular season, regardless of the NBA service days remaining on their contracts, starting Mar. 24). If they perform well, the Heat could unilaterally convert their two-way contracts to standard NBA contracts toward the end of the regular season (which would make them eligible for the playoffs, but increase their qualifying offers as restricted free agents this summer from another two-way contract with $50K guaranteed to $1.6 million guaranteed), but would perhaps be more likely negotiate long-term deals (they have the flexibility to offer up to four years). They could also choose to look elsewhere.

The Heat surely aren’t actively pursuing this tax avoidance strategy — which would involve missing the playoffs (and the playoff revenue that comes with it) in Dwyane Wade’s final NBA season. But that doesn’t mean they won’t prepare for it, in case it happens naturally. In fact, they undoubtedly will. Which would mean that, as far as the roster is concerned, we can expect three things to happen: (i) Heat head coach Erik Spoelstra may be mindful of Olynyk’s minutes for the rest of the season (he needs to average fewer than 23.9 minutes per game for the Heat to avoid the $1.0 million bonus payout) if it doing so doesn’t negatively impact the Heat’s playoff chances, and, more proactively in the meantime, (ii) the next contract that Heat president Pat Riley hands out, to meet the 14-player minimum roster requirement, will surely be a 10-day contract, and he’ll likely wait the full two weeks, until Feb. 20, to give it out, and (iii) after that 10-day contract runs out, Riley will surely wait the full two weeks (plus an extra couple of days, because the two-week period can’t expire on weekends or holidays), until Mar. 18, to give it out. While they won’t be forced to add anymore players after that (since the two-week period will carry them through the end of the regular season), they’ll surely add two more, to reach the maximum 15; they can split six NBA days between them (e.g., one signed with five days to go and the other with one day to go, both signed with three days to go, etc.).

Why would the Heat prepare for the possibility of missing the playoffs, in case it happens naturally (even if they aren’t willing to compromise their integrity to do it actively)?

Because the Heat missing the playoffs could lead to two undeniably valuable outcomes:

The Heat knew exactly what they were doing with the Ellington/Johnson trade. They believed it wouldn’t compromise the team’s competitiveness, they knew that the playoffs were long odds either way (with a relative strength of schedule as difficult as is theirs to close out the season), and they knew that it could mean big savings if they make it and avoiding luxury tax altogether if not.

With so much on the line, the Heat’s final 29 regular season games will undoubtedly be filled with drama!

There are other ways the Heat could reduce their team salary, in an effort to drop below the luxury tax line. For example:

The most logical way for the Heat to drop below the luxury tax is as presented above. The other methods presented in this footnote could prove helpful at a later date, depending upon how things play out.