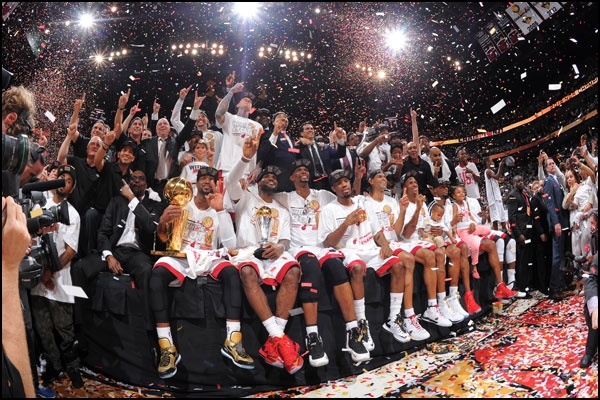 Their validation came in the form of a second consecutive championship celebration that began here late Thursday night and probably won’t end for days. And as the final seconds ticked off the game clock inside AmericanAirlines Arena, LeBron James, Dwyane Wade and Chris Bosh reveled in the moment. They earned it!

For Miami’s Big Three, the team’s 95-88 victory over San Antonio in Game 7 of the N.B.A. Finals completes a journey several years in the making. The Finals disappointment against Dallas in 2011, unforeseen setbacks and relentless criticism – much of it misguided – no longer mattered. They accomplished what they set out to do: win multiple N.B.A. titles as teammates.

That singular pursuit is what prompted the incomparable James to walk away from the team that drafted him, incurring the wrath of fans in his home state. It’s why Wade, one of the game’s greatest ever superstars, willingly stepped aside to let basketball’s best player lead the Heat. It’s why Bosh allowed himself to be denigrated from franchise player to disrespected third wheel.

The payoff was surely worth it.

In winning consecutive N.B.A. championships, the Heat joins an exclusive club that includes only the Boston Celtics, Chicago Bulls, Detroit Pistons, Houston Rockets and the Los Angeles Lakers. The list of teams that have made at least three straight Finals appearances in doing so is even shorter: the Celtics, Bulls, Pistons and Lakers.

Since James, Wade and Bosh teamed up, Miami has achieved the type of success only attained by the best teams of their eras. The Heat have redefined what it takes to achieve success in the N.B.A. With its superstar trio, teams now recognize they need to “adapt or die” in order to have any hope of winning a championship. General managers are constructing their teams with the Heat squarely in mind. Coaches are motivating themselves and their players by focusing squarely on the Heat.

And yet, they’re winning anyway. And they’re doing it impressively.

For much of the season, the Heat simply couldn’t be beaten by anything other than their own complacency.

They endured even through the absence of Wade, who suffered three separate bone bruises in his right knee with just a month left to go in the regular season. Ever had a bone bruise? It is perhaps the most enduring pain most N.B.A. players will ever encounter during their professional careers. The Heat’s 27-game winning streak was only snapped when a still-injured Wade attempted to return to game action and, in so doing, disrupted the team’s momentum.

So much hope potentially fractured when Wade fractured a few fibers in the tibia in his right knee in March. Those bone bruises cast the entire season in doubt. And yet, the Heat were able to persevere. Despite enduring some of the most ludicrous prognostications by self-styled experts yet, they won anyway. Because of the Norris Cole, Mario Chalmers, Ray Allen, Mike Miller, Shane Battier, Udonis Haslem, Chris Andersen, and so on. This was perhaps the most selfless championship team in N.B.A. history.

Yes. This team, this year, was that good.

There’s no way Miami can be characterized as a big market. By the N.B.A.’s own definition, the Heat is considered a small-market team. But Heat President Pat Riley and crew did their homework, cleared the necessary cap space, made the dream possible, executed upon it with deadly precision, and convinced the Big Three and the right complementary pieces to take less to make it all work – all just a couple of years removed from having the worst record in the league and failing to attract even the mediocre of free agent alternatives.

Since winning the 2005-06 title, Miami had not advanced past the first round. The arrival of James and Bosh re-energized the franchise and helped the Heat overcome an unexpected problem: Wade’s knee pain.

The future Hall of Famer was selected all-N.B.A. again this season. The late-season knee problems took some serious shine off a brilliant year in which he averaged 21.2 points, 5.0 rebounds and 5.1 assists on a career-best 52% shooting, as an emphatic answer to all the preseason skeptics who had begun to question his declining skills. Only Heat teammate LeBron James, Oklahoma City’s Russell Westbrook and the Los Angeles Lakers’ Kobe Bryant averaged as much in all three of those categories this season as Wade did (with the latter two shooting at least six percentage points lower in doing so). Wade, though, struggled throughout the playoffs while receiving treatment on his sore knees. Fortunately for the Heat, he succeeded in turning back the clock in the clincher, scoring 23 points and grabbing 10 rebounds in support of James.

Then there’s Bosh. A power forward who is at his best shooting long jumpers, Bosh plays out of position at center in the Heat’s smaller lineup. He had a nightmarish experience against Indiana’s Roy Hibbert in the Eastern Conference Finals. For most of the N.B.A. Finals, Tim Duncan badly outplayed him. But he came through with the rebound that set up Ray Allen’s game tying three-pointer at the end of regulation in Game 6, which will certainly become one of the most iconic shots in N.B.A. history. He then blocked the Spurs’ last two shots to help preserve that victory. The Heat wouldn’t have gotten to Thursday night without Bosh.

And then, of course, there’s James. N.B.A. old-timers mocked James for supposedly taking an easy path to trying to win titles. They said he would be Wade’s sidekick. Even if the Heat succeeded, according to James’s critics, James’s legacy would be tarnished because he needed the help of Wade and Bosh to win. Well, as it has turned out, they have been proven as wrong as could possibly be. Many of those same critics are now fighting to the death to convince themselves he’s not the best player of all time.

Almost three years ago, three friends came up with a plan. It required them to come together, nurture and embrace a host of complementary pieces, take on all of the doubters and the rest of the N.B.A., and build a championship legacy. Mission accomplished.

It’s fun to prove the doubters wrong. To see the haters expand the parameters of their ever-increasing self-delusion in order to find some semblance of balance within their own jaded minds.

No team these past three seasons, perhaps ever, has played amid the burden of such a weight of expectations. The Heat had to be the best. No middle ground.

We often see so-called super-teams in sports, a collection of players that, on paper, appear impossible to beat. Remember all the hype around the Los Angeles Lakers this season, for example? Steve Nash, Kobe Bryant, Pau Gasol and Dwight Howard. The team whose preseason odds to win the title were equivalent to those of the Heat? You know, the team that barely made the playoffs.

In modern sports, when great players are collected via free agency and trades, it’s nearly a shock when they win the title. Two in a row: that’s an epic accomplishment.

Thursday was the release valve, a moment that will forever change the dynamic of these three and this franchise.

No. 6 was transcendent. Simply transcendent – 37 points and 12 rebounds, including five 3-pointers, in capping one of the greatest individual seasons in sports history.

This 95-88 victory over the San Antonio Spurs was the coronation, the affirmation, the validation. No, not one … at least two … and the possibility of as many more as Micky Arison’s tax budget allows.

The scary thing for the rest of the league is that this Miami Heat team can still get a whole lot better. Bone bruises heal, without surgery, without any loss of athleticism, without any long-term implications. If Wade is healthy at playoff time, perhaps this Heat team tears through the playoffs more impressively than any team ever, just as it did the second half of the regular season.

Wade will most definitely be better. As scary as it may seem, James can still get better. Most of the team’s core, in fact, will undoubtedly return, and with an added year of chemistry. If the past is any indication, one or two difference-making acquisitions will be added as well.

In sports, the only thing bigger than championships is dynasties and legacies.

The first championship was vindication. The second is validation. Three would make a dynasty.

Perhaps it would also make LeBron James the best N.B.A. player… ever.

That’s the script for next season. For now, it’s sheer joy!